It is important that this document will not teach how to create new templates in Eloqua, but it will briefly explain the HTML code. Anyone who knows HTML should be able to look at the code and understand how the email is built, thus, also able to change it and create brand new modules, etc. based upon the base HTML.

2 Create your email from a template

To create an email, navigate to Assets > Emails

Now select the template SYSTEM_EMAIL_TEMPLATE and click choose.  You will need to have created templates beforehand and obviously the name will change depending on what you saved your email template as.

When working with emails in Eloqua that are based upon templates, Eloqua allows us to define areas, known as modules from now on, to “Allow Delete” and/or to “Mark as Editable”. When saved, the template is then protected so when creating new emails based on a template that is protected, the user is only allowed to modify those areas that have been designed to do so.

Each of these areas that the user can edit and/or delete is marked by having a blue-dotted line around it as shown in the image below: 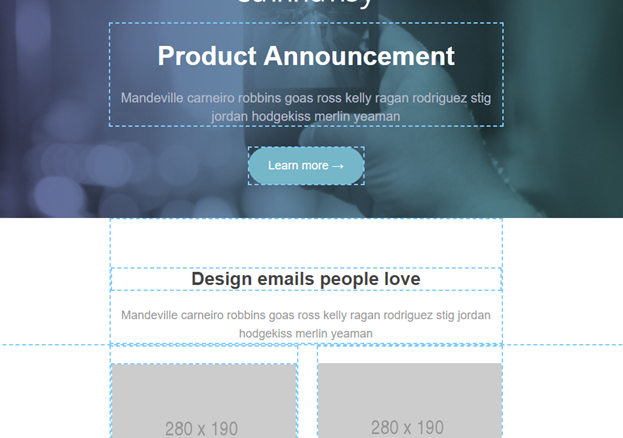 This email has been designed so you can remove whole sections that are not required.
Each section has a large blue box around it, navigate to the section you do not require and move your mouse over the outside of it, right click and select delete 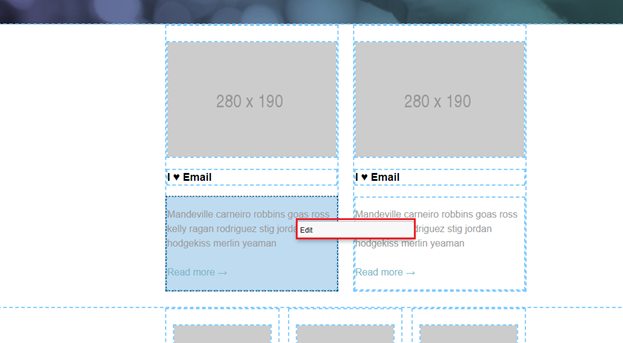 You will now get an editor open up.

There is an area for adding your text.

There is a control bar above this are for basic formatting.  It is no different to word.

To add in an image, you need to click your mouse in the area that you want the image to be,

then find and double click on the image you want to add in.

There is a control bar above this are for basic formatting.  It is no different to word.

To add in an image, you need to click your mouse in the area that you want the image to be,

then find and double click on the image you want to add in.

You may also add field merges, a field merge will populate a value held in either a custom object field of contact field. E.g. First Name, Company Name and Country.

All your available field merges will be in the right-hand side. Click on the area in the text that you want to see your field merge and then double click the field merge.

You will now see that the field merge has been added

6 Links in text or images

6.1 Hyperlinks
To add a hyperlink, click on the hyperlink tab.

You will see some greyed out commands on the right hand side.

Highlight the text or select the image that you wish to set a link on.

You now have several options:

Select the option for landing page and then click on the folder icon.

Navigate to the landing page you want to choose and then click choose.

In the editor elect highlight the text or an image, click on enable as a hyperlink and select the option of file in file storage.

Then click on the folder option and select the file you wish to link to. 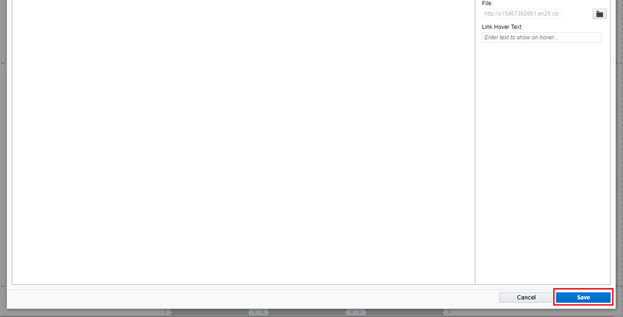 To create a hyperlink to a webpage, select the text or image that you want to set your link on, enable the hyperlink and select the Webpage option, enter the URL of the web page you wish to link to and if required click on redirect (for tracking purposes) finally click Save once you have finished editing that section. 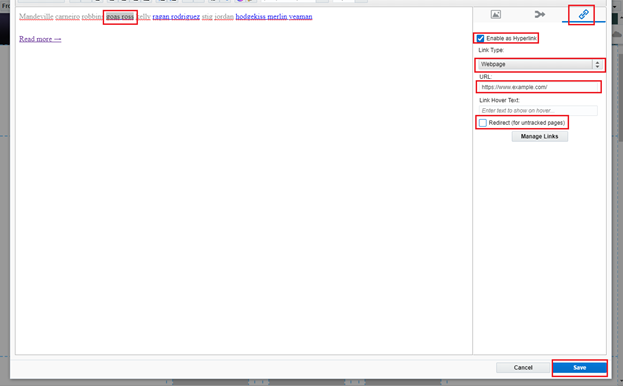 Select the text or image that you want to perform a system action with, then select the hyperlink option, enable the hyperlink and choose System Action.

You will now have several system action options.

Choose the option you require and then save the content section.

Finally save the section off when you are done editing.

All images will be sourced from a central repository and then uploaded to Eloqua for usage in the emails.

Using the correct image sizes is crucial, as image sizes can look correct in the template editor but display wrongly in some email clients/devices.

Replacing an image (when image is whole article)

The outermost blue dotted line is the one to select for deleting image: Right-click –> Replace 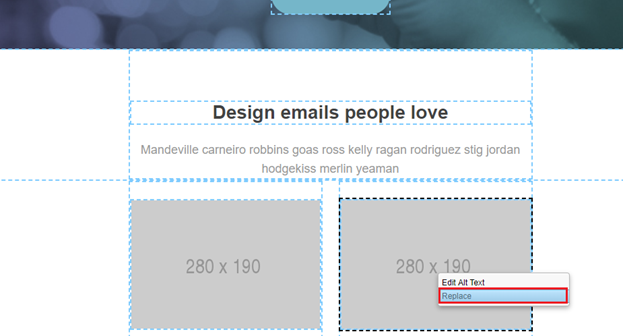 Navigate to the Assets > Components > Images

Now either double click and then select your image or drag your image to the blue upload box, then click upload.

Your newly updated image will be displayed

When you have finished your email click on the settings chevrons. 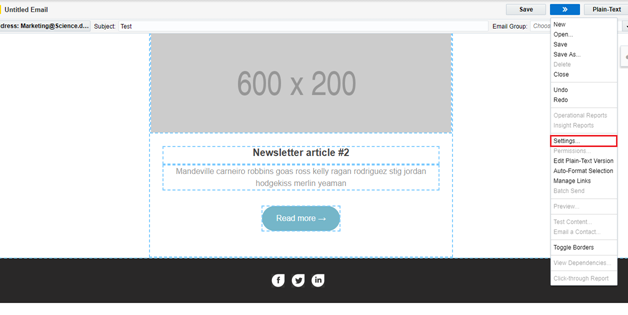 You will now see your sender options, update these accordingly. 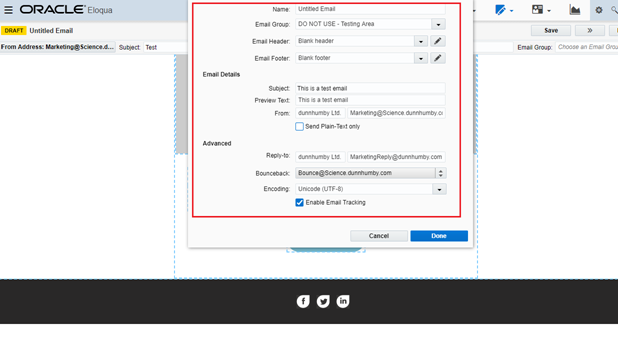 There are several options and functions, below is a table that describes what they. 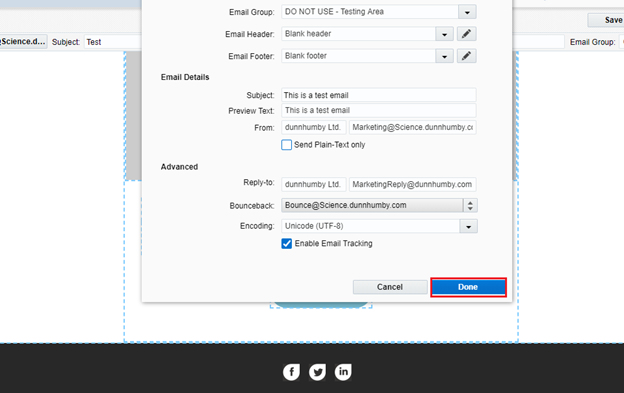 Once you have finished editing the email click on Save, and navigate to the desired folder where it is to be saved. 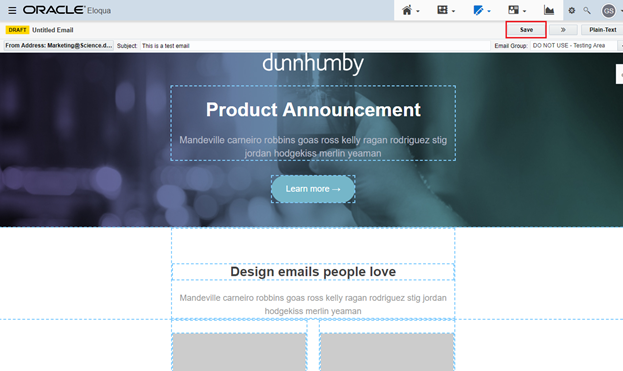 The reason you save it is so the text version is generated on your save and now you can edit the content you have just dropped in.

9.2 Text Version of the Email

Now you need to add in your text version of the email. Click on Plain Text.

Format the text according to how you want it, It is not recommended that you just use the system generated one because it will look awful.  Untick Automatically generate plain-text version, then click save. 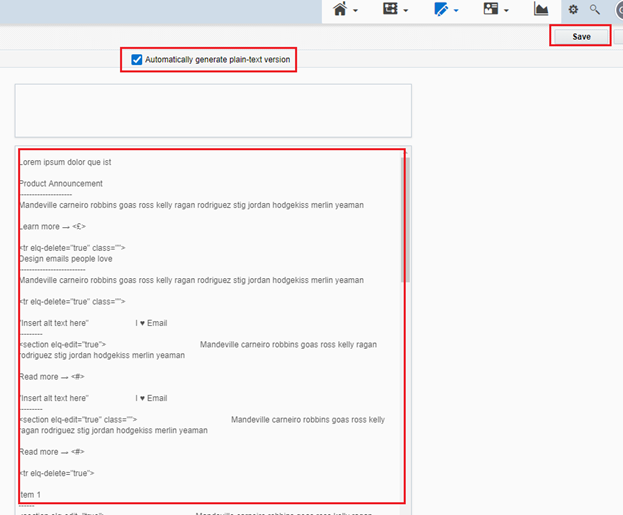 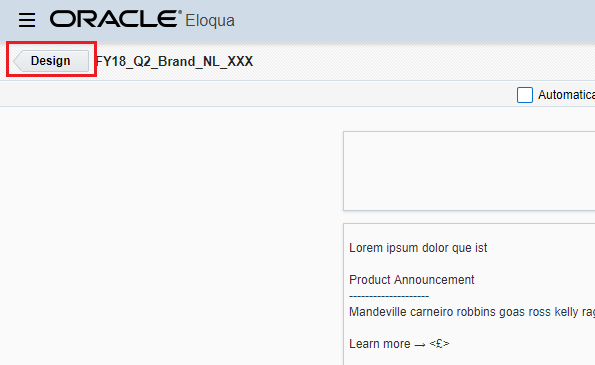 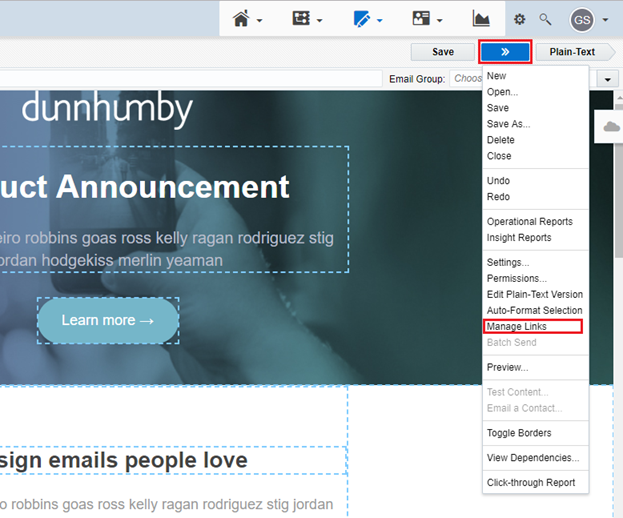 Now check the links that you want to track (Do not check links to Eloqua landing pages or other Eloqua hosted assets e.g. File-on-File storage.  These are automatically tracked).  If you check tracking, then the form will not populate the contacts details that we already have in the contact database.

11.1 Previewing your email on different devices

You can preview your email on different devices from the perspective of different contacts (e.g. to test field merges). 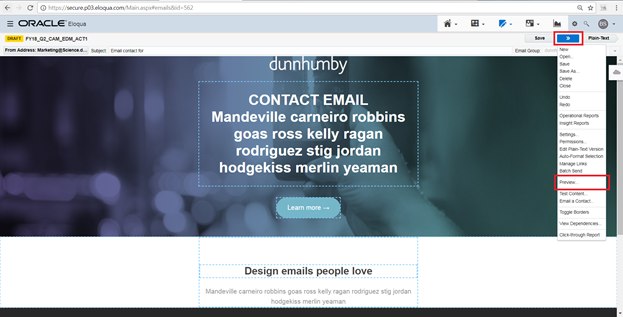 From here, find the contact using the search bar which you wish to view the email as and click Preview. 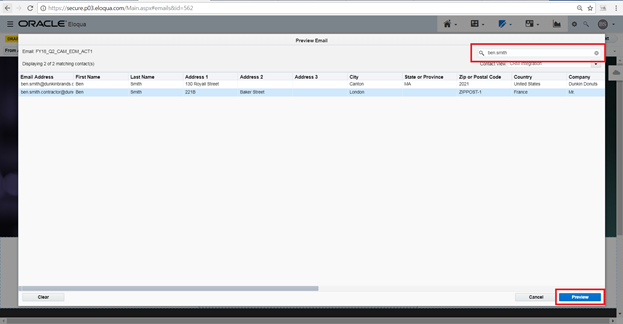 From here use the buttons at the top to cycle between previewing as desktop, tablet or mobile.

To exit this screen and return to your email, click cancel. 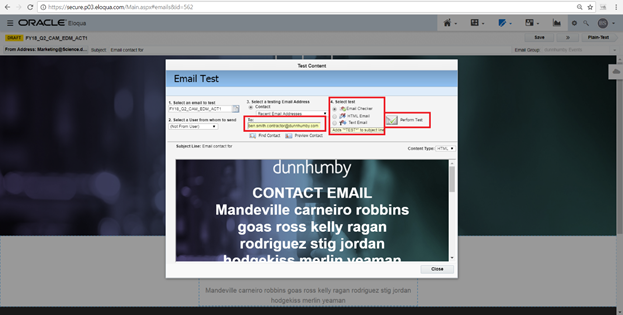 Your email content and links will be checked by Eloqua and the results will be displayed for you.

If you’re happy with the results, progress from an Email Checker test to an HTML Email test and click Perform Test.

Sign up here to get my latest articles as I create them.

No commercial email, I promise! 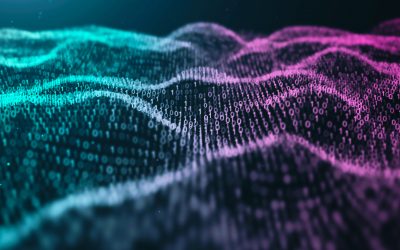 Creating Eloqua Landing Pages using the template editor 1 Introduction Landing pages are often the first significant part of a campaign that a contact will see. A contact may be directed to your landing page from a link in an email that was sent as part of a campaign.... 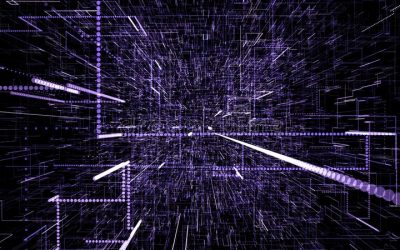 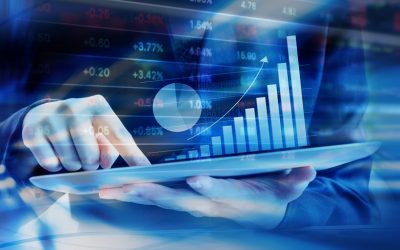 The Top 10 Eloqua Reports I often get asked by people, “Greg, what are your top ten out-of-the-box Eloqua reports?” So here you go, another playbook – enjoy! To read the full instructions provided by Oracle for all reports and functionality visit:...